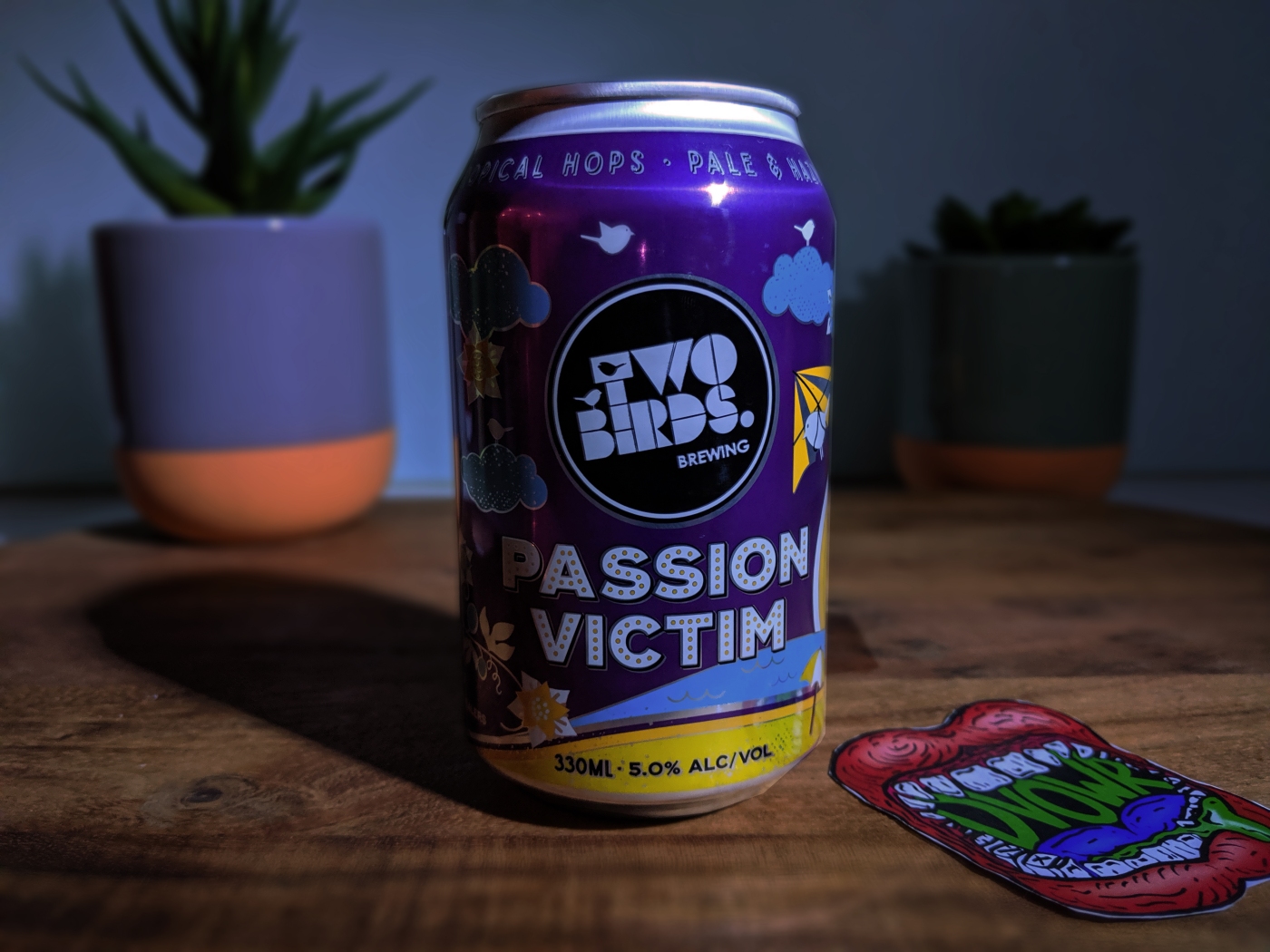 I was given the task to find a different beer, drink a lot of it and write a review. Pretty heavy task, I know.

Sometimes I love working for DVOWR.

I was looking for something different, something eye catching, to help with my plans for Friday night. One beer stood out amongst the rest – Passion Victim by Two Birds Brewing. As I was browsing beer, I noticed a trend towards different styled cans and bottles – artistic and minimalist labelling that captures the eye. Gone are the days of brown bottle beers with red labels slapped across them. The visual element of a drink is as much a marketing tool as taste, maybe even more so for the non beer connoisseur.

Passion Victim comes in 4 packs with 5% 330ml cans and is secured by environmentally friendly can rings. The label describes it as a fruit enhanced pale ale using tropical hops and passionfruit puree.

It sounded summery, it looked summery. If it is anything like Australian favourite Passiona – we’re in for a treat.

Then I got home and had my the first taste. Summer in a can.

Now I’ll announce my bias here – I’m a fan of pale ales. They are usually easy to drink, often have a fruity tang to them, and don’t leave you feeling like shit after eight. The downside is after eight at a bar, you rarely have enough money to get the ninth.

For those unfamiliar with what exactly a pale ale is, I’ve roped our trusty friend google in to help me out in explaining. Pale Ale is a top fermented beer made with predominantly pale malt. This is what tends to give it its notable lighter colour than other beers. What is top fermentation? Well I’m glad you asked and a little annoyed, because it contains some strange words like flocculating. But at its core it is essentially fermenting the liquid in an open topped container (stainless steel). Where the “flocculating” yeast rises to the top, creating a weird skin that you can then collect and add to the next container, changing the flavour elements as you go.

Back to the Passion Victim, and its name holds merit, as I was instantly a victim of the flavour. The smell as you opened the can was fruity but not too aggressively passionfruit scented. The first sip was just lovely – as was the rest of the can. Definitely one that captures those summer vibes in a very easy drinking beer while actually having an identifiable flavour palette. The mixture of three different types of tropical hops really gives you a flavoursome beer that tastes far from your classics.

It is delivered to you in a 330ml can (1.3 standard drinks) making it easy to get through without those last two sips sitting in the bottom of the can getting warm.

I was drinking with my house mates, one of which is not at all a beer drinker, and she very much enjoyed it. So it passed the test.

In short, this is a great drink to start a night, palatable to those that aren’t big on beer. A drink that isn’t heavy but has a flavour to be enjoyed by anyone. Even got the thumbs up from the girls I was drinking with. This is a good one to start off your summer nights that are long overdue. Whilst also being perfect for a Sunday sundowner session.

It sits at just under $20 for four cans, which some might think is a bit steep – but it is four decent cans that you will enjoy and a great way to start your night.

Want to know more about Stefan, Check out our About Us page. 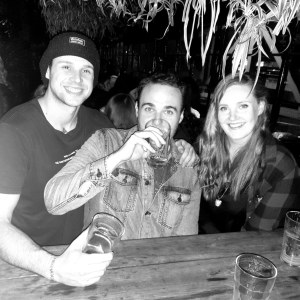 Polaris - HYPERMANIA (single) Hey there, been a while. Hope you’re well. They always say “new year, new you”. Fuck that. It’s the same old DVOWR you know and love. But new year, some banging new music. We kick this year off with something to absolute beat that ear drum of yours. Fast becoming DVOWR’s heavy outlet to break necks at 2am after 8 hours of drinking. Polaris follow up their incredible single Masochist with a god damn punch in the ear. If you would like to read more about what we thought of HYPERMANIA, click the link in our BIO. 🤟 . . . #polaris #music #rock #hypermania #official #song #video #DVOWR #hurtneck #monster #thedeathofme
After the release of their new gut wrenching single ''Fading,'' Denver, Colorado based post-hardcore heavy hitters ROZU took some time to shoot the shit and answer 10 quick questions. From ''what albums they'd bring to a deserted island,'' to ''what they think of our homeland heroes HANDS LIKE HOUSES'' - we were sure to ask all the important questions (well mostly). Click the link in our BIO for full interview 🎸🤟 . . . @rozu_official @handslikehouses #music #interview #10quickquestions #DVOWR #single #denver #colorado #rose #japaneserose #posthardcore #tour #rock #fading #anchor #faceless #divide #dissolve
Atticus - 47 (music video) In the deafeningly quiet and untouched moors of Ireland, if your lucky, you might just hear in the distance a monster drop into a chorus with some grungy and Smokey vocals attached. You’d be confused to begin with, but then find out that its actually the band Atticus smashing out their song 47. They will call you a little girl and tell you that you don’t belong here. But that is actually the deeper lyrics to a song that speaks of coming to terms with mental illness. To have a geez of what we thought head on over to the link in our BIO. 🎸🤟 . .@atticustheband @atticus.doc . #music #ireland #47 #atticus #single #video #inmemory #article #moors #song #band #alternative #grunge #father #guitar
While She Sleeps - Fakers Plague (single) . Sheffield metal core band ''While She Sleeps'' have dropped a brand new track ''Fakers Plague'' and not in same fashion as one normally would, Debuting the single in a hidden, underground location in Sheffield-accompanied with a hypnotic staged holographic video experience. Check out what we thought about it, click the link in our BIO.🎸🤟 . . . @whileshesleeps #music #whileshesleeps #fakersplague #single #video #holographic #debuting #sheffield #spotify #artist #underground #band #gig #track #brandnew #metalcore #metalcoreband #metal #uk #DVOWR
Here's to another year of slowly losing our hearing! 🎸🤟 . . . . 1st pic @chris_mcguinness24 2nd pic @stefan.szarski
Brighton(UK) based alt-rock triangle Lazybones have released their new explosive track 'Trash Talk' to SaySomething Records on October 9th. The track has already gained countless reviews and has playlisted them on Kerrang! Radio, BBC Radio and Amazing Radio. To check out the full article click the link in our BIO. 🎸🤙 . . . @wearelazybones #lazy #bones #DVOWR #listentothis #listeners #artist #listen #music #musicaddict #radio #single #musician #spotify #video #band #guitar #rock #newmusic #newsong #lovethissong #musicartist #applemusic #